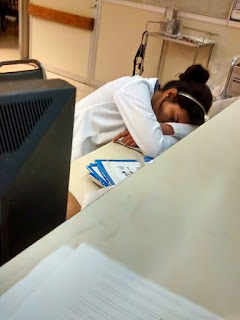 By Doug Wysockey-Johnson and Betsy Perry

A few days ago the issue of sleep and doctors went viral (at least among physicians).  In Mexico, someone had posted a picture of asleeping medical resident, attacking her for not doing her job.  In response, doctors around the world leapt to her defense by posting pictures of doctors caught napping during some of their most grueling shifts. These images are going viral and many included comments like “We are people, not machines.”

If sleep is not a big issue for you, then you can stop reading this blog right here!  Most likely, you’ll be reading on, and you know that sleep (or more accurately, the lack of sleep) touches on every aspect of your lives from how effectively you do your work, to your mood and emotional stability, and back to sleep itself. And researchers are recommending loudly and clearly that we need eight (8), yes, that’s 8 and not 4 or 7 hours of sleep each night. That puts most of us in a lifelong deficit of sleep which helps to explain a lagging sense of wellness especially after a sleepless night.

Dr. Matthew Walker of University of California Berkeley is finding out some explanation for the effect of lack of sleep. Using MRI’s, he found that the emotional centers of the brain were over 60 percent more reactive under conditions of sleep deprivation than in subjects who had obtained a normal night of sleep. He and his students began researching the affect of lack of sleep on emotions after Dr. Walker noticed that these same students would turn into “emotional JELL-O” after a night without sleep. How many times have you found yourself experiencing “emotional JELL-O” after a sleepless night? Think of the tired parent coping with a two-year old saying “No!” all the time. Think of the soldier dealing the stresses of combat. Think of victims of floods and tornadoes who have lost their homes.

The advice that we all need more sleep has been around for a long time. Even the Psalmist in Psalm 127 says, “It is in vain that you rise up early and go late to rest, eating the bread of anxious toil; for he gives sleep to his beloved.” This is a poem about daily work and family according to Walter Brueggemann in his 2014 book, Psalms. We can take it to mean that even God wants us to sleep well.

Reflection:  When have you been most tired?  Do you need more sleep now?  What can you do to get more rest?
Posted by Unknown at 1:17 PM