The Pace of God In Us (Or, Timing is Everything) 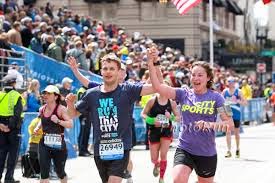 Let’s see if an old joke works on paper. In actual life it takes two people and at least one rehearsal; and still it’s iffy. Here goes [note: the second person’s part is in italics.]:

“What’s the most important element in ‘timing’ comedy?”

Laurel and I usually sit on the lectern side (left at WPC) and always near the front. We don’t have to be in the same seats but often are. It turns out that we tend to sit near the same neighbors. Let me relate the responsive reading practices of two of them.

Ray (may he rest in peace) always sat on the aisle in the fifth row, a few feet from us. He was not a shy man and was particularly adept at being the first one to read the bold lines in the worship bulletin. He was not only first, but early by a beat or two. In the length of a sentence, the rest of us would eventually catch up to where he was and we would end together.

Dorothy routinely sits one row behind us. She is a deliberate reader, with volume and expression, and tends to be a syllable or two behind especially on the Lord’s Prayer.

So, do I tell these anecdotes to mock believers who are different from me because, of course, I do it right? (Self-appointed standard-of-appropriateness that I am.)  Of course not, not at all!  I’ve just been thinking about the vastness of God and the differences in all of us, and how what’s right for one, timing wise, may not be right for the other. And I marvel at the simple things that take me out of my natural pace and rhythm.

I have a life goal of running a marathon but it will never happen; my left knee invited me to stop running three years ago. In better days, I was totally ready for the only half-marathon I ran and had easily run 10, 11 and 12 miles in the weeks before so what could be hard about 13.1 miles? Timing, that’s what!

I started the race in a group of runners too close to the front and their pace was not my pace. Because I went out too fast, by the mid-point I was toast. At 9 miles I was walking 100 steps and jogging 50 with walkers passing me. At the end, my goal was to finish ahead of the woman in the skirt. (Yes, it’s true and I apologize for my chauvinism.) She finished 30 yards in front of me and I was spent physically and emotionally.

Is timing the most important element in life? No, but I am confident of the importance of being careful to not be drawn away from the natural rhythm God seems to create each of us with. It might be that timing is a metaphor for the unique relationship God has for every individual.

Who are the Ray’s and Dorothy’s and women in skirts calling you to live within your unique rhythm with God?