Prayer for the Openers of Eyes 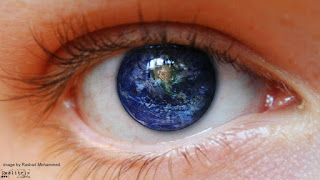 A few weeks ago, toward the end of migration season, I went on a bird walk at New Quarter Park, about ten miles from my house as the crow flies. The usual cast of local feathered characters appeared—American crow, turkey vulture, chipping sparrow, seagull, even a bald eagle—along with a wonderful assortment of transient birds—Northern parula, American redstart, black-throated blue warbler. Who knew they were around? I did not. However, because someone took the time to show them to me and to point out their chief identifying characteristics, I continued to see them over the next week or so. After my Centering Prayer group met the following Monday morning, a redstart showed up in a tree outside the church parlor window. In the church yard and again at the corner a half a block from my house, parulas were feasting in hackberry trees. In a tree alongside a meadow path where I walk my dog, two female black-throated blue warblers became visible. This is the ninth autumn I have lived in Yorktown. Those birds have passed through here each of those nine years. Until this fall, I had failed to see them.

I am grateful for bird-walking companions who help open my eyes. I am also grateful for parents, grandparents, teachers, neighbors, pastors, friends, colleagues, and even the occasional stranger for doing the same. By their example and by their instruction, they have showed me things about myself and the world I inhabit that I would otherwise not have seen or known how to name. They have opened my eyes by sharing knowledge and experience, offering insights, challenging my assumptions, touching my heart with their compassion, and shoring up my spirit with their love. Even when I have not known them personally, they have done this through books they have written, sermons they have preached, news they have broadcast, art they have made. Sometimes an offhand comment is what made a difference.

Back in the eighties, walking from a graduate classroom to chapel, I was engaged with several classmates in a conversation about inclusive language. I remember saying something along the lines of how it didn’t bother me to hear God always referred to by masculine pronouns because I knew that God wasn’t only male. “Well, it bothers me,” one of my male professors said. He said it quietly, more to himself than to the rest of us. I’m not sure anyone else even heard. But as clearly as though he had pointed out an eastern phoebe on a woodland edge, I suddenly saw something I had never seen before about the way I use language: often habitually, and sometimes unthinkingly. I have tried ever since to be more aware—and inclusive—in my own speaking of God.

We have just celebrated the Feast of All Saints. High on my personal list of saints would be those who have opened my eyes. I thank God for them and for all the many ways in which they have helped me see.
Posted by Unknown at 9:25 AM