Yet Another Prayer for Meadowlarks 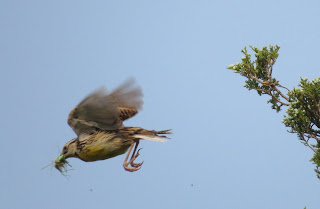 Last summer I took on the project of documenting Eastern Meadowlark activity in my local national park. I went to the meadow nearly every day; as a novice birder, I needed lots of practice watching the birds move through their various stages of breeding. By all accounts, they had a pretty successful season—and one I was thrilled to see unfold. By the time the meadow was mowed on September 2, the original five or six birds nesting at two separate ends of the meadow had a combined flock of about two dozen. I continued to monitor them, though more casually and less frequently, through the fall and winter months to see whether they would migrate or remain in the area. They stay, all winter, though sometimes in other nearby fields.

In April of this year, I again began observing the birds in earnest. Believing that I had a better sense of what to look for, I went only twice a week. At first, the Meadowlark activities met my expectations: they sang and chittered, gathered grasses to build nests, carried grasshoppers to feed nestlings, and later encouraged fledglings to catch bugs on their own. Gradually, however, I realized I was seeing fewer Meadowlarks than last year. Suddenly, in the last week of August and again the first two mornings of September, I saw none. Not a single one.

Something was different this season from last. People who know more than I do about birds are trying to help me figure it out, including a wonderful park service intern who is crunching some numbers to determine where the differences lie. We had two particularly heavy rainfalls about ten days apart in June—each time, almost two inches in less than an hour. Because Meadowlarks nest in covered depressions in the ground, could rain have flooded and damaged the nests at a critical time? But the birds were here in July and most of August. Why have they disappeared now, when they were still around this time a year ago? Could they be nearby, just in a slightly different place, one where I haven’t yet learned to look? Suddenly I feel like a novice birder again.

Even as I ponder questions about the Meadowlarks, I realize I am also thinking about Spirit, for I sense some parallels. Sometimes I catch glimpses of the Spirit, as bright and quick as any bird. I begin to recognize its song and think I have finally learned how it operates, say, in my prayer life, or in my sense of call, or in my openness to patience and forgiveness and healing. Then something shifts. What I expect to see is suddenly silent, invisible. The pattern has changed. I am back to being a novice as I watch and wait again.
Posted by Unknown at 9:15 AM