Prayer for a Signboard and Two Variations 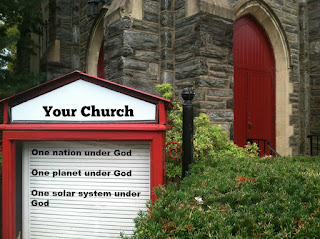 “We are still one Nation under God.” Thus saith the latest church signboard to capture my attention and fire up my imagination. What prompted it? I wonder. And what does it intend to convey to those of us who see it as we drive along Virginia’s busy Route 17?

The slogan first appeared during an intense few weeks in June and July in which Momentous Decisions were being announced nationwide. The Supreme Court had decided that both Obamacare and same-sex marriage were constitutional. The South Carolina legislature had decided to remove the Confederate flag from statehouse grounds, and other legislatures had begun debating similar issues. Headlines rolled across the country like waves crashing onto a beach, gladdening some, maddening others. Perhaps the signboard was meant to remind us that that even fellow Americans who hold different points of view are beloved by God. “We are still one nation under God.” Perhaps those words are both a prayer and a call, a call to continue to seek common ground, finding ways to cleave to one another in love and support rather than allowing ourselves to be fractured by our differences.

I have two variations to propose in this summer of Momentous Events. Here’s one: “We are still one Planet under God.” That comes in response to On Care for our Common Home, Pope Francis I’s encyclical on the environment which was published in that same weeks of early summer (and which is readily available online; if you have not read it, I commend it to you). The scope of the encyclical is far-ranging. Among other things, it addresses climate change, global inequalities, the destructive effects of modern anthropomorphism, religions in dialogue with science, and civic and political love. Ultimately it asks people of faith “to dare to turn what is happening to the world into our own personal suffering and thus to discover what each of us can do about it.” “We are still one planet under God.” That too could be a both a prayer and a call, a call to care not only for our nation but also for rest of “this fragile earth, our island home” with all its varied peoples and creatures and other living things.

Here’s the other variation I propose:  “We are still one Solar System under God.” Thanks to NASA, this summer we have been seeing spectacular up-close photographs of the dwarf planet Pluto. I don’t know how they strike you, but I find them amazing. Who knew Pluto would have a heart-shaped ice field? “New Photos Reveal a Planet That’s Stunningly Alive” a National Geographic headline read just days ago. Is a prayer of awe and wonder implicit in that? Stunningly alive! Could that be what we are each called to be?

What a summer it has been! One Nation under God. One Planet under God. One Solar System under God. Is there a call in any of those signboards for you?
Posted by Unknown at 9:06 AM