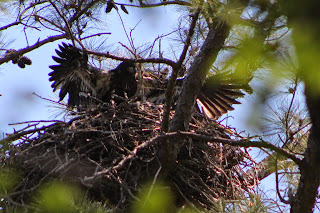 What a difference a few days can make. While I was away for a week, the grasses in the meadow I have been watching grew a foot or so (thereby giving the Meadowlarks plenty of cover in which to hide their nests), and the glorious Blue Grosbeaks returned. Meanwhile, one of the two Bald Eaglets I have been keeping an eye on since early March apparently fledged, and the lone remaining eaglet looks as though it will take off any time now. Over and over it stretches its wings, flaps them, and lifts a few inches off the nest. Through my binoculars, I catch a fleeting glimpse of daylight under its feet when it rises up. It settles again mid-nest. Then it hops up onto the nest’s edge and looks out over the tops of the trees toward the river, and then down to the forest floor, and then out again.


Such wondering has particular poignancy for me this year. Two family members—my sons’ paternal grandfather and my daughter-in-law’s father—are house-bound and in hospice care. In a sense, their task is the opposite of the young eagles’ task. Their call is not to leave their respective “nests” and become independent. Rather it is to stay centered in their nests, to let themselves be cared for and loved. And yet in some ways their work is the same, for in the end, like the eaglets, they will need to let go and fly into a world they cannot yet completely know.


And so, when I hold them in my prayers now, I lift them up not as two frail old men on the verge of dying but as two eaglets on the verge of learning a new way of soaring into a new kind of life. For both of them, and for all of us as we take the next steps on our journeys, I pray for the courage to let go of the old so that we can soar, and I pray for good timing.

Email ThisBlogThis!Share to TwitterShare to FacebookShare to Pinterest
Labels: Angier Brock, courage, Death and Dying, Lumunos. Meadowlarks, The Storm is Passing Over