Prayer for my Goddaughter 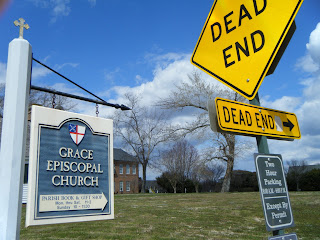 The road ahead: Is it really a dead end, or does it lead to grace? That question is raised by the juxtaposition of two signs placed within a few feet of each other half a block from my church, Grace Episcopal Church. Both signs point in the same direction. One of them, erected by the state department of transportation, is intended as a warning. “Dead End” is what it says. The other sign, pointing to the church, is meant as an invitation and a welcome. Whether you continue on the road or search for another way depends, I suppose, on what you are looking for and which sign you trust.

The events of holy week pose essentially the same question as the two signs: Do they lead to a dead end in the arrest and crucifixion of Jesus, or is grace at work in spite of how things look? Once again the answer depends on what you are looking for and what signs you trust. I have heard it suggested that Judas, reading events through his hope for a king like David—that is, a king who would be a strong political and military leader—had foreseen only a dead end on the horizon. Feeling his hopes betrayed, he became the betrayer. Surely the others must also have feared a dead end at first. But they stayed the course, and slowly they began glimpsing signs of hope—first Mary Magdalene at the empty tomb, later Thomas in the upper room, and gradually others. Jesus appeared to them, spoke to them, ate with them along the road. Their lives with the earthly Jesus would never again be the same, but the grace of the Risen One was there to comfort and sustain them in new and surprising ways.

The Easter story has been more immediate to me this spring than usual. Four weeks into Lent, my goddaughter’s husband, only in his thirties, lost his struggle with acute leukemia. He died less than two weeks shy of the date scheduled for him to receive a bone marrow transplant. He died exactly a week before the birth, on Good Friday, of their second child, a daughter. The untimely loss of her young husband, the love of her life, must seem the ultimate in dead ends to my goddaughter. And yet smack into the aftermath of her unspeakable grief has come a new life. What a profound final gift of love her husband has left her and their two-year-old son.

Does the arrival of the baby diminish her grief? No, I think not. Only the passing of time will do that. But neither does her grief keep her from embracing this new child with delight and joy. My goddaughter will undoubtedly live for a while the way the followers of Jesus lived in the days and weeks after the first Easter, that is, in the tension that comes from holding both great grief and great joy simultaneously. My prayer for her is that through her tears as well as her joy, her sadness beyond telling as well as her devotion to both of her young children, she will know the sustaining love and power of the Risen Christ.

What about you? Is there a place in your life that looks like a dead end? Stay the course. Look again. You too may see signs along the way that point to grace.

PS: A hymn text by a 19th century Scottish poet Horatius Bonar, speaks to the reading of signs, both in the physical world and in the Easter story. Here are the verses found in the Episcopal Hymnal 1982 (#456):

O love of God, how strong and true,
eternal and yet ever new,
uncomprehended and unbought,
beyond all knowledge and all thought.

We read thee best in him who came
to bear for us the cross of shame,
sent by the Father from on high,
our life to live, our death to die.

We read thy power to bless and save
e'en in the darkness of the grave;
still more in resurrection light
we read the fullness of thy might.

Bonar’s poem can be sung to several tunes. My favorite is by 20th century composer, Calvin Hampton: