She gave birth to her first son, wrapped him in cloths and laid him in a manger – there was no room for them to stay in the inn.  ~ Luke 2:7 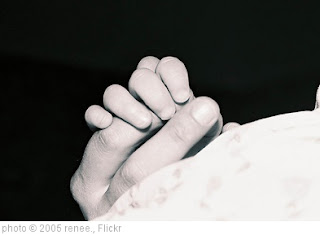 December of 2009 was the Christmas my mother was diagnosed with cancer. It was also my daughter Sophia’s first Christmas; she was then eight months old. It’s been a tough slog through the Valley of the Shadow, a journey so maddeningly out of my control, I am often forced to pry my white-knuckled, control-freak fingers off of the steering wheel and let others drive.

For me, the journey of motherhood is interwoven with the story of my mother’s cancer. It’s been all at once, overwhelming and ugly and beautiful and filled to the brim with mediocre miracles, which is the story of faith in a nutshell: Not a compilation of transcendent mountaintop experiences, but a muddling along through the desert with manna here and there to keep you going. The whole thing is so horribly ordinary that if you get too busy looking for the shiny mountaintop experience, you’ll miss the rusty, beat-up, tear-stained extraordinary.

One such experience occurred in June when my mother returned home from a month long hospital stay after her most recent skirmish in her battle with cancer. A growth was removed, and her small intestine was rerouted to an angry hole about three inches to the right of her bellybutton. The medical term is ileostomy, and for the first few weeks at home she lay weak and pale in her bed, with eyes like big blue marbles staring out of a body that had lost twenty pounds in the course of two weeks. Her voice was hoarse and gravelly when she spoke; too much movement left her breathless. The person I counted on, even at the age of thirty, to be my mom needed mothering.

It was a tough recovery with days and nights of round the clock medical care required of my father and me. There was not enough of us to spare for three-year-old Sophia who was growing frustrated and clingy. She knew her grandmother was sick, but didn’t understand why my time with her was cut short, why her normally energetic grandparents couldn’t play, or why she only spoke by phone to her daddy who was at home, three hours away.

Sophia’s frustration grew as nurses came and went, having solemn conversations, and shutting the adults in her life behind closed doors while she was left alone with her toys in the living room. She began to act out even though I tried as best I could to explain the situation in three-year-old terms. She threw tantrums, clung to my legs, intentionally disobeyed, and even hit me a couple of times. She wouldn’t go to sleep at night, but would lay awake until well past midnight, waiting for me to slip into bed beside her so that she could have me all to herself.

“Be patient with her,” my mother said. “This is stressful for her too, and she’s dealing with it the only way she knows how.”

I nodded, knowing Mom was right even as I considered selling Sophia to gypsies. But patience is not my strong suit, unfortunately, and Sophia’s behavior continued to deteriorate, as did my sanity.
Finally, one day, in a fit of exhaustion, I gave up the wrestling match. Sophia was clinging to my legs, and begging not to be left alone, but I needed to go into my mother’s room to change her ostomy bag. It was one of those moments when my clenched fingers were peeled off the steering wheel, and Grace came rolling in, driving a beat up ice cream truck, and peddling mediocre miracles for the price of giving up control. It was the moment I stopped shutting Sophia out, it was the moment I decided we would face the messiness of life together.

I opened the door, and let Sophia come in to watch while I performed the painful change of my mom’s ostomy bag, something I was sure would scar Sophia for life. But Sophia just stood on the stool at the foot of my mother’s bed, calmly surveying the scene.

“Oh Granna,” she clucked in a matronly little voice, “you have a very big booboo. Does it hurt?”
My mother chuckled. “Yes, it does hurt,” she answered truthfully. “But if you hold my hand it will feel better.”
Sophia beamed from ear to ear, then hopped down from the stool, and scurried over to my mother’s side. She became the official hand holder, which remained her job the rest of our stay. In that moment a little light shown in through the darkness. Sophia’s behavior improved once we stopped trying so hard to shield her from the messiness of life, which of course meant we stopped trying so hard to shield ourselves.
As I muse over the messy journey of motherhood and cancer, I often find myself thinking about the Christmas Story. Not the part about the angels or the wise men or the shepherds. No, the part about Jesus being born in a barn.

We try to sanitize it with chubby cheeked cherubs, fluffy white sheep, and a smiling, well-rested Mary draped in blue; but the reality of birth in a first century Judean barn, to an impoverished, Jewish teenager in Roman occupied Palestine, is not a pretty picture. I wonder if Mary herself ever felt so overcome with it all that she gave in to moments of insanity. 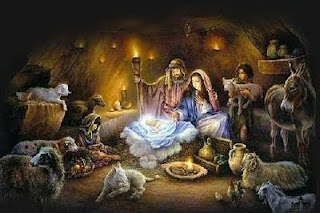 It was thousands of years ago and thousands of miles away, but it is a visit that for all our madness and cynicism and indifference and despair we have never quite forgotten. The oxen in their stalls. The smell of hay. The shepherds standing around. That child and that place are somehow the closest of all close encounters, the one we are closest to, the one that brings us closest to something that cannot be told in any other way. This story that faith tells in the fairytale language of faith is not just that God is, which God knows is a lot to swallow in itself much of the time, but that God comes. Comes here. “In great humility.” There is nothing much humbler than being born: naked, totally helpless, not much bigger than a loaf of bread . . . The world has never been quite the same since. It is still a very dark world, in some ways darker than ever before, but the darkness is different because he keeps getting born into it. The threat of holocaust. The threat of poisoning the earth and sea and air. The threat of our own deaths. The broken marriage. The child in pain. The lost chance. Anyone who has ever known him has known him perhaps better in the dark than anywhere else because it is in the dark where he seems to visit most often. – Frederick Buechner, The Clown in the Belfry

This blog was originally published by Rachel Held Evans.
Neely is a writer and blogger living in South Carolina with her husband, daughter, two dogs, one cat, and a turtle. She has a degree in Christian Education and Philosophy from Presbyterian College, and served the Presbyterian Church (USA) as a Youth Minister for a number of years. She is currently working on her first novel. Her blog is Glimpsing God; The Story of my Offbeat Faith. Enjoy!
Posted by Unknown at 7:00 AM