We are not yet what we shall be, but we are growing toward it.  The process is not finished but it is going on.
Martin Luther 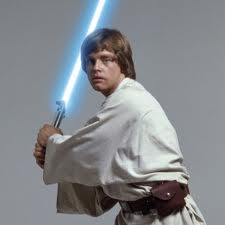 k all you Star Wars fans, here is a question for you: What made Luke Skywalker the person he was?  How about Anakin? What shaped their identity?

According to a recent exhibit at the Montreal Science Centre, Luke’s identity (and ours) is formed by a complicated mixture of genes, parents, mentors, significant life experiences, choices and values.   It was a brilliant exhibit that managed to teach the science of identity in a way that captivated a 52-year-old man (that would be me) and his 8-year-old son.

The biblical narrative isn’t quite as popular a story these days as Star Wars.  But there are many insightful stories about identity, including that of Peter.  Peter and Jesus were close friends.  In their earliest meeting, Jesus makes a bold statement to Peter:  “You are Simon, the son of John--but you will be Cephas (which means Peter”).

Throughout the rest of their recorded friendship Jesus usually calls his friend Simon Peter.  Jesus used both names—who Peter was, and who Simon was becoming. Through this friendship with Jesus, Peter’s identity both stayed the same, and was changed.  Like Luke Skywalker and us, Peter’s identity was formed through his parents (“You are Simon, Son of John”), his experiences, his genes, mentors and life shaping experiences.

I continue to find myself in the midst of this “you are—you shall be” equation.  Sometimes I am stunned at my ability to get caught in the same traps, make the same mistakes and stumble over the same rocks. Still Doug for sure.  Then once in awhile, by the grace of God, I look and see that I am becoming a new person.

Richard Rohr calls this process “falling upward.”  He writes, “The first task is to build a strong ‘container’ or identity; the second is to find the contents that the container was meant to hold.”  Along the way we embark on a further journey, one that involves challenges, mistakes, and loss of control amongst other things. (Falling Upward:  Spirituality for the Two Halves of Life) This ‘falling upward’ is not always fun—ask Luke Skywalker or the Apostle Peter.  But it does lead to greater clarity about what provides meaning in our lives.  And it allows us to give ourselves to others more authentically.

May the Force be with you as you where ever you are on the “You are—You shall be” continuum.
Posted by Unknown at 8:01 AM