Fear & Worry: How near is God to you?

Will you ever understand how near God is to you?
- Lalla, fourteenth century C.E. 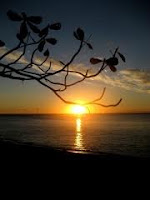 “I can’t really explain it,” I said weepily.  I was talking to my Dad on the phone, trying to describe an uneasiness that had me in its claw, “It’s been here for a string of days.  I feel worried and fearful, irrationally so.”

Ugh!  Fear and worry.  Are they sometimes familiar characters for you, too?  Since it’s my tendency to feel confident and competent, when worry and fear find me, my initial reaction is brush them aside, much like the good witch in The Wizard of Oz.  To the bad witch says firmly, but with a smile, “You have no power here, be gone!”

Lately, though, I’ve noticed that my polite requests aren’t always enough. The sticky “inconvenience” of worry and fear extend a bigger invitation and remind me I can pray insight and for help.

In the Jewish tradition, believers are instructed to offer a minimum of 100 blessings a day.  One hundred!  “But a person would have to pray all day long!!!” you might be saying.  Ah-HA!  Clever, isn’t it?  And, as a result, Jews have blessings for everything: blessings for the phases of a day, and blessings for the endless activities one might find him/herself doing in the turn of 24 hours: waking, sleeping, eating, drinking, entering, leaving, hand-washing, celebrating, grieving, garden-tending, working, love-making, greeting one another, greeting a tree, and so on.

So, what might a blessing for fear and worry be like?  I’m still experimenting, but the quote above has been a light-hearted and poignant teacher:  even in the gripping distraction of fear and worry, God is near.  Whether gently nagging or all-pervasive, I’ve begun to see fear and worry as a call to prayer.  I greet them with gratitude, “Thank you, Fear, for reminding me that God is right here.  You, Fear, might be here…and God is too!”  And, “thank you, Worry, for reminding me to ask for help.  I see you, Worry, pushing me to call on my community for support, reminding me to take a break and find something wonderful to laugh about!”

And most importantly, “Thank you, God, for reminding me that you are so much larger than any of my fear or worry.”

About : lives in Berkeley, CA.  She serves as the for The Chaplaincy Institute, an interfaith seminary and tends a her private as a spiritual director.  You can read ’s blog at: http://www.laurenvanham.com/

Prayer for the Fledglings


“Be willing to be a beginner every single morning.” ~ Meister Eckhart 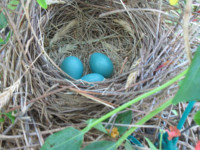 I have been watching a robin’s nest, beautifully woven together in a tangle of coral honeysuckle vines in my back yard. When I discovered the nest a few weeks ago, it contained three blue eggs. Every few days, I checked on the eggs, sometimes taking a small step ladder and my camera. I knew when the first egg hatched, and the second, and the third. I watched as those three bare hatchlings grew, opened their eyes, and sprouted feathers.

On Mother’s Day, my visiting granddaughters were thrilled to observe the nest from a distance and to glimpse a baby robin raise itself up and flutter its wings, discovering what might be possible. The next morning, the nest was empty. The young birds had gone.

Spring is the season for fledglings—everything from birds that hatch and grow and leave their nests to young people who graduate from high school or college and leave their respective homes or dorm rooms to head out on the next phase of their journeys. 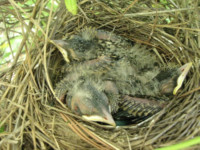 In fact, I think there must be something of the fledgling in each one of us, something just on the verge of becoming itself. No matter how old we are or how mature, there is something new in each of us that is vulnerable, something that is not yet fully accomplished—but that is nevertheless ready to try to come into its own.

Being a fledgling is a risky business. What if our wings don’t quite work? What if we can’t find our own food? What if there’s a snake in the grass, waiting to swallow us up? It can be easy to want to remain in the nest where we feel safe and secure. But once we have been called to fledge, it is time to find the energy and courage to do so.

I don’t know where those little robins are now. Their parents seems to be lingering in the area, so perhaps the fledglings too remain nearby, hanging out in the undergrowth as they continue learning to manage the complexities of their lives. Where ever they are, may they dodge would-be predators. May they find the food and water that they need. And may their wings always be strong enough to take them to what is possible, to bear them up in flight.

I told the waitress at My Father’s Pizza that she was taking a picture of a miracle. It may not have been a miracle, but it was one of those moments that you say, “Thank you, Lord.”

We were visiting our friends Dwayne and Kathy in North Carolina after the Lumunos board meeting and it was our last day.  Our flight was at 4PM so we thought to get to Greenville SC in time, we’d have to leave at 1PM.  Our plan was to spend the morning at the Biltmore Estate and leave from there.

It turns out the Biltmore tour was more expensive than we wanted to pay for the brief time we would have. $40 each, for an hour and a half wasn’t going to happen, so we decided on a short tour of Montreat, our denomination’s magnificent conference facility.

As we drove into to Montreat, we were greeted by balloons and “Welcome to ARW” signs. I know what ARW means because I had attended the Annual Recreation Workshop 10 years earlier and learned to be a mediocre folk dance caller.

A beloved former pastor had encouraged me to attend and I knew him to be totally enthusiastic about ARW.  I said, “I wonder if Carl is here? Bet he is.”

After a few minutes of gawking at Lake Susan and giant rhododendrons, we decided to go over to Assembly Inn and ask if Carl was registered.

He was! As Laurel was finding through official channels where he would be at that moment, Kathy actually ran into him near the session he was leading. (Some of us were exploring our way to the restroom.)

Carl gave us his sandwich order and we made plans to meet in nearby Black Mountain for lunch after his session.  The four of us at the table had important, tender connections in many combinations and it was a sweet time. Better than we could have planned. Miracle? Maybe so, maybe not – but clearly a really good, God moment. What fun.

I know for sure that I don’t know if I believe that God made that happen. I do know that God was there.
Posted by Unknown at 9:30 AM No comments:

Stories from the Field: Man Up/Man Down 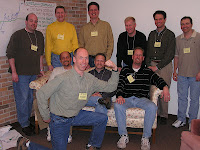 Recently I finished two weekend retreats in a row. (Chicago and Marble Collegiate)  Both were Men’s Retreats, using the Apostle Peter’s story as the Biblical conversation partner.


In many ways, Peter was a man’s man – fisherman, decisive leader, outspoken alpha male.  He fits many of the stereotypes of what it means to be a man, from Jesus’ day to ours.  But, the one called “The Rock” was also a fragile stone.  His fears, betrayals and questions also sounded familiar to us in 2012.  Here are a few retreat highlights: 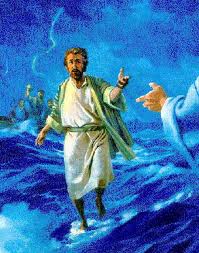 I am so grateful to witness the power of Lumunos’ ministry first hand. Thanks for your prayers and support!