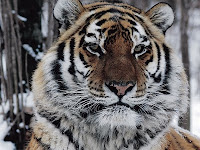 As it turns out, some tigers have a hard time forgiving.  There is a new book out by John Vaillant called The Tiger.  One part of the story involves an Amur (Siberian) tiger who was wronged by a human. The man shot the tiger without killing him, and then took the tiger’s kill. After a period of time, the tiger tracked down the man in his cabin, destroyed anything with the man’s scent on it, and then killed him.   It is a primal and extreme version of a drama and an emotion that happens every day in the human arena.

We humans hold grudges.  We remember wrongs.  We seek revenge. We struggle to forgive.  And sometimes we rise above it.

My friend Brad has just been wounded by his family of origin.  Again.  For the 100th time his parents and siblings have found a way to stick the knife in, this time by not inviting him into a conversation that involved the whole family. Rather than exact some sort of revenge, or nurse his resentments, Brad did the harder thing.  Over the course of a few days, he looked squarely at the hurt and allowed himself to feel the grief.  He didn’t hide his feelings from the family. He took a few walks and received the support of friends.  It took time and energy.  Following call always does.

But he did the work, and now he has been able to re-engage the family in a way that is nothing short of inspiring to me.  Where anger and revenge would be understandable, I see grace and even support of his family.

Wendell Berry knows something about the struggle to forgive his family. In his poem A Letter (to my brother) he writes:

Dear John,
You said, “Treat your worst enemies
As if they could become your best friends.”
You were not the first to perpetrate
such an outrage, but you were right.
Try as we might, we cannot
unspring that trap.  We can either
befriend our enemies or we can die
with them, in the absolute triumph
of the absolute horror constructed
by us to save us from them.
Tough, but “All right,” our Mary said,
“we’ll be nice to the sons of bitches.”
Wendell Berry, Leavings

Forgiveness is an outrage.  It is a call that requires hard work, lots of help and usually time. The only thing worse is the opposite—what Berry calls “the absolute triumph of the absolute horror constructed by us to save us from them.”


Reflection Questions
With whom are you angry?  Is there work you need to do?  Are you called to forgive yet?

Doug Wysockey-Johnson
To comment on this blog, simply click the title of the blog, scroll to bottom, and write your comment in the box provided. You can post anonymously, or using your name by typing it at the end of your post.


Photo by John Goodrich
Posted by Unknown at 12:55 PM