Power on the Playground 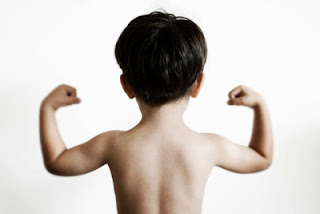 Some of you remember Robert Fulghum’s essay “Everything I needed to know I learned in kindergarten.”  He called it his credo, and it included things like “Play fair”, and “Clean up your own mess” (BP take note.)  It went viral before there was much of a viral.

I thought of Fulghum’s piece the other day as I went through my son’s preschool notebook.  In it I came across a single sheet of paper that said this:


You are Powerful When You….

There is nothing in this definition about money, physical strength or prestige.  Nor does it describe many of the people our society considers powerful. In this definition we are most powerful when we are giving something away, serving, or deepening a relationship.  Most of the world’s great spiritual traditions would agree.

This week, what might it mean to try something hard, or listen?  How might you help somebody find something or keep yourself healthy?  Will these acts make you powerful?

See you on the playground, where most good learning happens.

Doug Wysockey-Johnson
To comment on this blog, simply click the title of the blog, scroll to bottom, and write your comment in the box provided. You can post anonymously, or using your name by typing it at the end of your post.
Posted by Unknown at 3:54 PM No comments:

Trailmarkers Toward a More Meaningful Life

“What does this mean?”  might just be my favorite question.   (Not counting “Would you like a second scoop of Ben and Jerry’s Chubby Hubby?”)

Life moves quickly.  We are bombarded with experiences, conversations, interactions, feelings and images.  Most of those are just life coming at us—we cannot take them all in and ponder the meaning of each and every thing that happens.  But some of those experiences are like trailmarkers to something deeper, something meaningful.  They are clues toward a life of greater significance and integrity.

• Steve was talking with a few of us.  In a fairly routine way, he mentioned his wife.  Suddenly he got choked up, caught off guard by his emotion.  Steve wondered what that was all about.

• Mary is tired again today.  Maybe she has a low grade virus, or maybe her body is telling her something else—She wonders what her fatigue means?

• Jose went in to his favorite small bookstore yesterday and had a casual conversation with Bill the owner.   While talking, Bill revealed something about himself that Jose didn’t know before.  Jose felt like they connected in some small way, and he walked away more energized by the conversation.  Why did that conversation feel meaningful?

This Sunday the Christian church marks an event called Pentecost.  In the story found in Acts 2, a wild and crazy event happens to a group of people who have gathered for a religious festival. Nobody knows exactly what is going on.  While it is a more dramatic happening than what most of us experience in our daily lives, the question they ask is the same:  What does this mean?

One of the keys to a deeper inner life is a willingness to slow down long enough to ask this question about the experiences we have.  In some cases, the conversation/experience/dream/feeling might not mean much at all. Freud said that sometimes a cigar is just a cigar, and for us sometimes that feeling in our gut is just last night’s burrito.  It may not mean anything more than that.

Or not.  In speaking about these kinds of questions, Barbara Brown Taylor writes:

Most of my visions of the divine have happened while I was busy doing something else….My only part is to decide how I will respond, since there is plenty I can do to make them go away, namely:  1)  I can figure that I have had too much caffeine again; 2) I can remind myself that visions are not true in the same way that taxes and the evening news are true; or 3)  I can return my attention to everything I need to get done today.  These are only a few of the things I can do to talk myself out of living in the House of God.
Barbara Brown Taylor, An Altar in the World


Have you come across any trailmarkers lately?


Doug Wysockey-Johnson
To comment on this blog, simply click the title of the blog, scroll to bottom, and write your comment in the box provided. You can post anonymously, or using your name by typing it at the end of your post.
Posted by Unknown at 11:01 AM 10 comments:

In his highly recommended book Crossing the Unknown Sea:  Work as a Pilgrimage of Identity, Whyte recounts these words spoken to him by a trusted friend at a time of real work exhaustion:

You are so tired through and through because a good half of what you do here in this organization has nothing to do with your true powers, or the place you have reached in your life.  You are only half there, and half here will kill you after a while.
Crossing the Unknown Sea, p. 132

We can do work that is not right for us for awhile.  Sometimes for a long while.  But eventually it will kill us.  Maybe literally, or maybe just a piece of our soul or passion or joy dies.  One way or another, spending our energy on things we don’t care about eventually takes our life.
This true for our volunteer efforts as well.  In a recent article in Inc. Magazine,  Meg Cadoux Hirschberg wrote that nurturing ourselves by doing things we're passionate about in turn allows us to "wholeheartedly" nurture others -- including our families and the organizations we work with.  She rightly points out that there is tension when we take family time to volunteer our time for good causes….but if we are giving ourselves to things we feel strongly about, we will often come back to the family more wholehearted.

It is  important to spend our precious time on things we care deeply about.  When we are “called to the cause”, even when it is hard, the energy will usually come back.  When we aren’t, the energy we spend volunteering will usually turn into anger or bitterness.  And the trickle down effect will impact those closest to us.

Most things worth doing will be hard at some point.  This is true in our vocations and avocations, our paid work and volunteer efforts.  But if it is always hard; if the energy doesn’t come back after a challenging stretch; then it is probably time to do some thinking and praying.   Because half there will kill you after awhile.

Doug Wysockey-Johnson
To comment on this blog, simply click the title of the blog, scroll to bottom, and write your comment in the box provided. You can post anonymously, or using your name by typing it at the end of your post.

How Far Will Buddy Go?

While waiting to get on my 5:15pm commuter bus, I watch my driver Buddy help a blind man off the bus.  The man is either new to riding the bus, or maybe even new to his blindness.  He didn’t have the ease and dexterity I see in some people as they navigate obstacles with their red tipped canes.
Buddy helps the man off the bus, and now keeps going.  With the man’s arm around his, he walks ten yards up to the busy crosswalk.  Is he actually going to walk him across the street?  How long will he leave his $350,000 bus unattended?  How far will Buddy go?
Buddy is hands down the best bus driver I have seen.  I take the bus into work about two times a week, and each time I appreciate the way he does his job.  He has the basics covered—safe driver, gets people boarded efficiently, shows up on time, gives us all the information he has if there is a problem.  It is the “above and beyond” part that I really appreciate.  He greets many of his customers by name as they get on. On Fridays he hands out free mints to celebrate the upcoming weekend.  Occasionally he will turn on the microphone to tell a joke.  Whether or not he would use these words, it is clear that Buddy sees his work as a ministry and service to others.
How far will Buddy go with the blind man?  How far do any of us go when we are doing the work we are called to do?  There always comes a point—sometimes sooner, sometimes later—when one part of our call comes into conflict with another call we have.  Buddy was helping a blind man who could have used help getting across the street.  But he also had customers waiting to get on, and a $350,000 bus he was responsible for.
The other evening I sat with a committee I have been on for a few years.  Our group runs a children’s program my kids are involved in.  I care about the program, both for my kids benefit and others. That night we were talking about all the slots we needed to fill and the things that needed to get done.  I looked at my calendar and the other commitments I had made, and I wondered, “How far will Doug go?” What will be the impact on other aspects of my life if I say "yes" to some of these needs?
There is no template or formula to answer this question. As one Lumunos writer said, our lives are a little more like beef stew than a neatly compartmentalized TV dinner.  (Full story)  The pieces of our lives are usually intermingling in a messy way, with no clear borders.   We make our decisions with fear and trembling.  And then we make them again.
Buddy left the man at the street corner, and warmly greeted us as we boarded the bus.
Doug Wysockey-Johnson
To comment on this blog, simply click the title of the blog, scroll to bottom, and write your comment in the box provided. You can post anonymously, or using your name by typing it at the end of your post.
Posted by Unknown at 3:21 PM 5 comments: