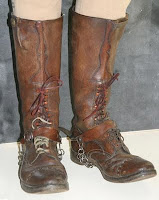 I have a rule that if any new clothes come in the house, then something has to leave the house. I will add more stuff only if I’m willing to subtract stuff as well. I’m always looking for loopholes to this rule: if I get a pair of boots as a gift, then I didn’t really purchase it, so nothing has to leave the house, right? (And yes, I did ask my sister to give me boots for Christmas. Oi.)

We people of faith have been looking for loopholes for a very long time. Maybe this is why Jesus spoke so clearly about it, at least in Eugene Peterson’s version of the Good Samaritan in Luke 10:
25Just then a religion scholar stood up with a question to test Jesus. "Teacher, what do I need to do to get eternal life?"
26He answered, "What's written in God's Law? How do you interpret it?"
27He said, "That you love the Lord your God with all your passion and prayer and muscle and intelligence—and that you love your neighbor as well as you do yourself."
28"Good answer!" said Jesus. "Do it and you'll live."
29Looking for a loophole, he asked, "And just how would you define 'neighbor'?"
30-32Jesus answered by telling a story. "There was once a man traveling from Jerusalem to Jericho. On the way he was attacked by robbers. They took his clothes, beat him up, and went off leaving him half-dead. Luckily, a priest was on his way down the same road, but when he saw him he angled across to the other side. Then a Levite religious man showed up; he also avoided the injured man.
33-35"A Samaritan traveling the road came on him. When he saw the man's condition, his heart went out to him. He gave him first aid, disinfecting and bandaging his wounds. Then he lifted him onto his donkey, led him to an inn, and made him comfortable. In the morning he took out two silver coins and gave them to the innkeeper, saying, 'Take good care of him. If it costs any more, put it on my bill—I'll pay you on my way back.'
36"What do you think? Which of the three became a neighbor to the man attacked by robbers?"
37"The one who treated him kindly," the religion scholar responded.
Jesus said, "Go and do the same."
I suspect that when it comes to material goods, I will always be looking for loopholes. Maybe especially around Christmas time. It’s helpful to know that Jesus fielded questions from those people like me so long ago, and WOW did he have an answer! We are all neighbors? Shoot. No loophole there!

NPR reported last week that people would rather have a big screen plasma TV, regardless of its energy cost (which is $200 a year, the same as a refrigerator (the Daily Green) than make a more energy conscious decision. Looking for a loophole, maybe?

Here in the DC metro area, we know that much of our energy comes from coal mined by Mountaintop Removal methods – watching those new plasma TVs that Best Buy has cute carolers so joyously singing about literally comes on the backs of our neighbors in West Virginia. How does that fit into the message of the One whose birth we celebrate this month?

Because I’m not alone in both my desire to live as Christ would have me, AND in my desire to look for loopholes, I’m sharing a few links I found helpful; see what you think:

>>>>The Story of Stuff shows the whole picture of our buying habits. We live in a closed system, no matter what marketers say!
>>>>Advent Conspiracy, provides ideas, resources and a helpful conversation to “take back” Advent as the season to “Worship fully, spend less, give more, and love all.”
>>>>The Faith and Money Network (their website is currently under construction, but check back with them - they are good folks!)
>>>>PBS ran a great show called "Affluenza". Two factoids: the average American parent shops 6 hours a week and spends 40 minutes a week playing with their kids; working couples talk with one another on average only 12 minutes a day. Maybe a good Christmas gift would be play time, or face to face time!

So God bless us, everyone, both as we seek the loopholes, and face anew each day our choices to love our neighbor... with what we buy, and what we give, and what we don't buy and give.
Posted by Unknown at 2:22 PM