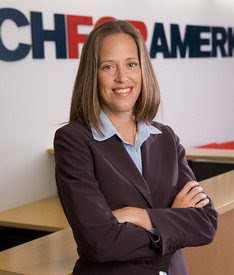 Teach for America is a wildly successful nonprofit whose mission is to eradicate educational inequity. Its founder, Wendy Kopp, is worth listening to. Here are four things I learned about call, work and life in general from a recent interview with her. (New York Times Business Interview 7/5/2009)

Thanks to Wendy Kopp and all who have taught through Teach for America—the world is better because of you.
Posted by Unknown at 1:27 PM