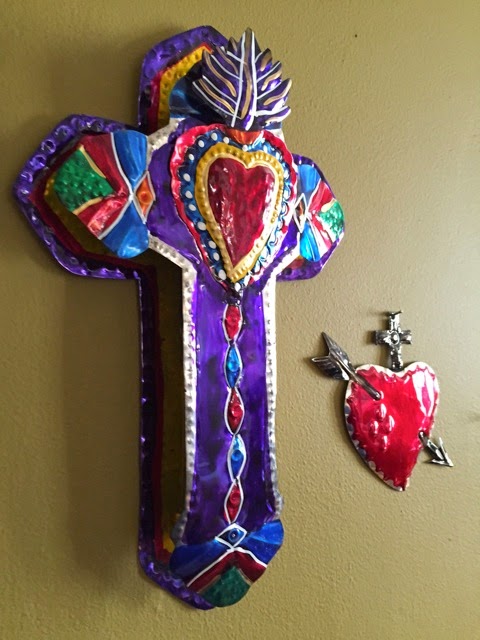 It’s ridiculous, and that’s why I’m going to church on Good Friday and Easter.


Last year about this time, as I passed a guy I work with who was clearly leaving early, he waved goodbye and said, “3 o’clock Good Friday. Time to start drinking.”

I work in advertising, so I’ve heard and seen just about everything. But still, this jarred me a little. That’s all Jesus’ death on a cross means to most of us anymore? An excuse to go drinking?

At the same time, I realize this whole “Jesus dying and being resurrected” Holy Week/Easter thing is kind of strange, even to people who check the little Christian box on the form that asks your religious preference. And to those who check any of the other boxes, it probably seems downright ridiculous.

To be honest, even on my best Christiany sort of days, the whole thing seems a bit ridiculous to me too. Ridiculous to think that some guy’s torture and death 2000 plus years ago matters a hoot in my life today. Ridiculous to believe that this guy rose from the dead, and that whole event changes everything for all time.

Yet, no matter how hard this story is to believe, I want to believe it.

Because I know we live in a world in which torture and death happen on a daily basis. Where 3-year-olds, babies, are sexually abused by older brothers while the parents hide their eyes.

Where kids are fed a constant diet of shame, told they are worthless, stupid, too much, too little, not enough, and end up dead inside, like a house still standing, but with the lights burnt out.

A world where some people throw food away and others starve. Where some of us spend more on one cup of coffee than others make working hard labor for an entire week.

But I want to believe that death and injustice and steaming piles of CRAP don’t get the final say.

I want to believe in a life in which new life can happen.

And I kind of have to believe it, because I’ve seen it. That three-year-old girl – I know her—and she’s been resurrected into a strong, beautiful, wise and loving woman.

That boy who was brought up on shame and told he was stupid and worthless from the day he was born, I sit across from him once a week in a therapy group and he’s one of the brightest, most insightful and clever people I know. So much of him has been buried for so long, but every week I see his stone rolled away another inch.

In fact every week in therapy I feel a little like Mary, showing up at Jesus’ tomb at dawn (ok therapy starts at 7:30 a.m., which is not always dawn, but definitely dawn-ish) to witness these people who have been beat up and raped, whose hearts have been stomped into bloody pulps, and who were never loved and adored as they should have been, come alive again, little by little, shedding the grave clothes they’ve called home for too long.

I have borne witness to these resurrections.

I also have been witness to those who help birth resurrections.
Those who see seemingly insurmountable wrongs, places where crucifixions are going on unchecked, and rather than walk away or look away or feel powerless, they do crazy things to try to fix them.

Like this guy Chuck who goes to my church -- he’s 80 now and over 40 years ago he started a legal aid clinic in Cabrini Green, an infamous low income Chicago housing project – offering free legal services to those who needed them. The fresh starts, the new lives people have been given through the years because of him and the people who’ve gathered around to help him, literally number in the thousands.

At the end of the Good Friday service at my church last year, we were all invited to come to the front, place a hand or rest a forehead on one of the crosses at the front of the sanctuary, to stand or kneel, to pray in whatever way we could, for all those who suffer, anywhere and everywhere, for those we know, those we don’t know, for our own suffering, too. 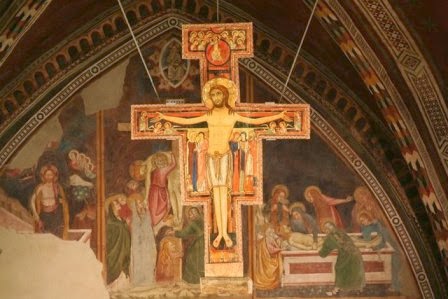 I lowered my forehead to one of the crosses that had been laid on the floor, a four-foot-long plywood version, wrapped in this printed out copy of an icon
of Jesus that someone on our church staff found on the internet, bless their hearts -- the San Damiano Cross – the original said to be the one St. Francis of Assisi was praying in front of when he got his big wake up call from God.

The absurdity of it all struck me once again. Believing in this story, trusting in resurrections. Silly, really, me kneeling, placing my head on the open palm of the outstretched arm of some quick print Jesus nailed to a cross…I kinda felt like giggling. What was I doing? What did I hope to gain?

Bowed there, knees sore, hoping my butt didn’t look too big to anyone who might be noticing, I suddenly thought of that line from a Carl Sandburg poem:

“The single clenched fist lifted and ready,
Or the open asking hand held out and waiting.
Choose.”

Oh yes…so much of the time, I live a clenched fist life. Ready to defend, push away, strike first, protect myself, grab for what I can get, gripped by fear that there isn’t enough to go around.

Going to church, kneeling in “prayer” (which I put in quotes because most of the time it just feels like me talking to myself), believing that in some miraculous, indefinable, un-provable and yet incontrovertible way, there is hope for all those who suffer, healing for the brokenhearted, there is a power at work in the world, that we can be a part of, that transforms suffering and death, little by little, in ways we may not be able to even see, into something else, believing in absurd resurrection, in life after all the deaths we face, all the deaths we sometimes even deal out…to me…that is like prying open that fist, one finger at a time.

So this is why I celebrate Good Friday, sitting in a church rather than a bar. To acknowledge the pain, the darkness, the unanswerable questions, the deaths within us and around us, then to rest for a moment in the open arms of Jesus, or some reasonable facsimile thereof, and to believe that all is not lost, Sunday is coming.

This is why I will go to church again this Easter Sunday, because even though I don’t always have one, I believe that the open asking hand, ready and waiting, is the most crazy and most sane, and possibly most holy, choice I can ever make.

Lenora Rand is a freelance writer and advertising creative director at one of the world’s largest ad agencies. She’s also a wife, mom of two daughters, and trying to figure out how to live her life with more meaning and purpose while working 60 hours a week and trying to get the laundry done. You can see how that’s going at her blog, Spiritual Suckitude. Follow her on Facebook at Spiritual Suckitude Society. And on Twitter @LenoraR. 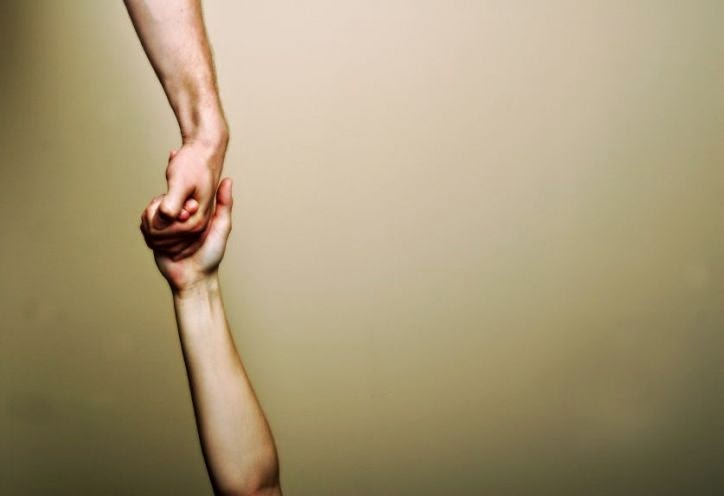 At a recent Lumunos Men’s retreat, I asked the question “Have you ever been saved by God?”  Not in the altar call, conversion, ask Jesus-in-to-your-heart-and-he-will-save-you-from-your-sins kind of way.  I meant more like an answer to the cry of the Psalmist:


Save me, O God,
for the waters have come up to my neck.
I sink in deep mire,
where there is no foothold;
I have come into deep waters,
and the flood sweeps over me.  (Ps. 69)

Honestly, I wasn’t sure what to expect—I had never asked this question before on a retreat.  I wasn’t even sure how I would answer it.  But the guys jumped in with lots of responses that touched me deeply.


A few told stories about being in the grip of addiction.  For them, God’s help came in the form of someone inviting them to an AA meeting.  One man talked about the death of his 12 year old son.  In the midst of his grief, a mom in church simply invited him to hold her infant son.  Healing came as he and the baby locked their eyes on each other.  Most of the stories involved a combination of acts of caring and compassion by fellow humans, the timing of which was more than just coincidence.  It was, as I once heard it put, more like a ‘God-incidence.’


I am probably not quite ready to get a “Jesus Saves” bumper sticker for my car.  But after hearing these stories, I am more convinced that he does.  More often than not, through a person responding to a nudge, calling or intuition.


“God is hiding in the world.  Our task is to let the divine emerge from our deeds.” ~    Abraham Heschel, I Asked for Wonder
Posted by Unknown at 10:02 AM No comments: