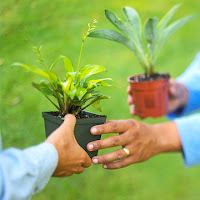 When a black garden center-style pot shows up alongside the fence that runs between Edith’s yard and mine, I know something good has arrived. By dropping the pot over the fence, Edith has delivered seedlings, bulbs, or a shoot or two of something she has rooted or thinned out.  She is forever puttering in her garden, and my yard is often the beneficiary of her labor. Sometimes—though not as often, for she is the far better gardener who already has most of the plants I have— pots also travel in the other direction over the fence, bearing offerings from my yard to Edith’s.
The same thing happens during vegetable-growing season. One of us will hang a grocery bag over the fence for the other to find. Lettuces, herbs, cucumbers, beans, squash, turnips, potatoes—whatever one of us has that the other doesn't—travel across the fence. Sometimes the pots of plants or bags of vegetables follow a conversation that transpired when we were out working at the same time. Other times they just appear.
Last Sunday was Earth Day. The day before, when I was out planting some ornamental ginger Edith had dropped over the fence, it occurred to me that this sharing of the fruits of one’s labor is in itself an observance of Earth Day. I had an image of one neighbor passing produce from her garden along to another, and of that person sharing his harvest with someone down the street, and that neighbor giving something else to yet another, so that a vast network developed, neighborhood by neighborhood, and spread itself all around the globe. Wouldn’t it be wonderful if large-scale sharing were that easy!
Alas, it is not, for many complex reasons. However, sharing beyond our immediate block is made possible by churches that encourage its members to bring their extra garden produce with them on Sunday mornings. Parishioners without gardens can then take what they wish, leaving a free-will offering in return. The money thus collected can then go to a local food bank, expanding the network created by the initial gardeners in ways that include strangers as well as friends.
And what we share doesn’t always come from fruits and vegetables we ourselves plant and tend. Sometimes what we share comes in the form of store-bought canned goods that others planted, picked, and processed before we purchased and donated it to a food closets. Sometimes it comes in the form of cash or checks we give community pantries. Sometimes it comes in the choices we make about how we use the earth’s resources. Sometimes it comes in the form of budgets our representatives—local officials and state and national legislators—set on our behalf, budgets which share (or not) the pooled resources of our political districts, our states, our nation.
In this week following Earth Day, it seems good to think about sharing food as a way to honor the earth itself. This week, I will hang a bag of parsley, dill, and mint over the fence for Edith. I will take wildflower seeds to church for planting as food for two colonies of honey bees, newly in residence there. I will also contact one or two legislators about the sharing I would like to see in the budgets they oversee. I will write a check to the local food bank.
As I do these things, may I remember with deep gratitude all the refreshments of food and beauty that spring from the earth. May I remember the work of both friends and strangers whose labors sustain me on my journey.
And may our sharing increase.
Posted by Unknown at 9:39 AM