A Prayer After Liberating a Tree by Angier Brock 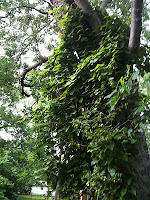 The tree, a common hackberry, stands across the street from my house on a small but steep embankment. Even the one relatively flat approach to it presented challenges: the tangled ground cover was a tripping hazard and it hid the entrance to a groundhog burrow, itself an ankle-twisting hazard. Moreover, the ivy vines climbing the trunk had grown way too large for pruning shears. To cut through them required the use of a pruning saw. What all this meant for my aging and sometimes arthritic joints was that the job was strenuous work. But it was also straightforward work. The point was to rescue the tree from the ivy that threatened to strangle it, and rescue it I did, in about thirty minutes.

I have to admit that I enjoyed thinking of myself as a liberator, even of a tree, even if briefly. And no wonder. Our planet earth is in dire need of being freed from famine, over-population, pollution, poverty, and a host of other things so numerous it is hard to list them all, let alone know where to begin tackling them in order to make a difference. So too in my own life there is much from which I could use a little liberation. You know the kinds of all-too human afflictions I mean. Greed, prejudice, self-righteousness, self-absorption, depression, loneliness, fear, and rage are but a few. What if a good saw and thirty minutes of vigorous work would free us and our world from the “vines” that threaten to strangle us physically, emotionally, intellectually, and spiritually?

Alas, it is not that simple. Or perhaps it is. My experience with the hackberry tree reminds me that while I cannot do everything—I cannot rescue all of the trees in the world, or even in my own neighborhood—I can do something. It also reminds me that while pruning shears and handsaws are not appropriate for every task, there are nevertheless tools I can pick up and use day after day. Reflection is one, time spent in intentional silence. Another is service. A third is reading: whether it be poetry or prose, fiction or non-fiction, sacred or secular, the point is to spend time with words that foster in me a more discerning heart, a greater generosity, and, above all, the courage to try again.

What about you? What tools of liberation are at your disposal? When and how do you use them?

The ivy around that hackberry tree will probably grow back. Sooner or later it will need pruning again, though if I am vigilant, the task next time may not be nearly so onerous. In the meantime, other vines will threaten other trees, and weeds will creep into the garden. My prayer is not so much to take care of any of them once and for all. It is rather to be able to keep close at hand the tools that can help me be an instrument of liberation. And to remember to use those tools over and over and over. . . .
Posted by Unknown at 9:35 AM