Prayer on a Summer Day 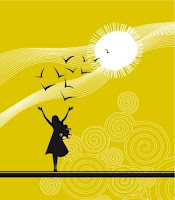 “I don’t know exactly what a prayer is,” writes the poet Mary Oliver in her poem, “A Summer Day.”

Do you know exactly what a prayer is? Like the poet, I do not, not really, not with any certainty. And yet, for most of my life, I have felt called to pray.
That doesn’t mean that I have always responded faithfully to that call. Nor does it mean that my habits of prayer, when I have managed to establish them, have always taken the same form. Sometimes I have walked my prayers. Sometimes I have written or drawn them. Sometimes I have used prayer books, and other times, prayer beads.
My most recent prayer habit, which took place first thing in the morning, included an extended period of inner stillness. That practice has dissolved in recent weeks, however, first with the adoption of a puppy, and then with the arrival of two grandchildren, ages 7 and 9, for a three-week visit. The resulting changes in household dynamics gotten me thinking again about how to pray.
After confessing that she doesn’t “know exactly what a prayer is,” Oliver adds, “I DO know how to pay attention” (my emphasis). The things she writes about paying attention to on her summer day are different from—and generally quieter than—those I am currently paying attention to on my summer days. She watches a grasshopper chew. I watch for cues that the puppy needs to go outside to potty. She falls down on her knees in the grass and strolls through fields. I play Sorry! with my grandchildren, fill an inflatable pool for them in the backyard, and share popcorn in a dark theater during the last of the Harry Potter movies.
Are those activities prayer? Probably not, at least not in any traditional sense. But perhaps yes if, as I go about them, I can remain fully aware of and present to the goodness inherent in all of God’s creatures. Later there will be time to resume other forms of prayer, but today, if I can simply pay attention, perhaps that is enough.
Angier Brock
The Summer Day
by Mary Oliver
Who made the world?
Who made the swan, and the black bear?
Who made the grasshopper?
This grasshopper, I mean—
the one who has flung herself out of the grass,
the one who is eating sugar out of my hand,
who is moving her jaws back and forth instead of up and down—
who is gazing around with her enormous and complicated eyes.
Now she lifts her pale forearms and thoroughly washes her face.
Now she snaps her wings open, and floats away.
I don't know exactly what a prayer is.
I do know how to pay attention, how to fall down
into the grass, how to kneel down in the grass,
how to be idle and blessed, how to stroll through the fields,
which is what I have been doing all day.
Tell me, what else should I have done?
Doesn't everything die at last, and too soon?
Tell me, what is it you plan to do
with your one wild and precious life?
"The Summer Day" by Mary Oliver, from The Truro Bear and Other Adventures: Poems and Essays. © Beacon Press, 2008. Reprinted with permission. (buy now)
Posted by Unknown at 9:16 AM