After the Inaugural--The Power of Normal 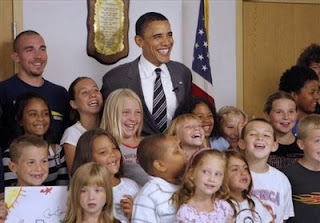 I am thrilled that my four year old watched President Obama's inaugural speech at his preschool yesterday. I want this moment to be etched into his memory; I want him to be able to recall it 50 years from now, the way I (barely) remember the 'I Have a Dream' speech.
But beyond the celebrations of yesterday, I am excited for today, and the day after and the day after that. I look forward to the big deal becoming not a big deal. What I want is for my children to see the words 'President' and 'Obama' together, and not think anything of it. That it is perfectly normal for an African American to be president.
This kind of normalcy is important in other places. The church we attend had a woman minister when we arrived. (She has since moved on to another position). I liked that every Sunday my children's image of a minister was female. It was normal. Ministers are women or men. My daughter will have no tape inside her that says 'Women can't be ministers' because it hasn't been her experience. And millions of African American children will have no tape that says they cannot be president. It is the power of normal.
Posted by Unknown at 9:10 PM